MONSIEUR DOUMANI -is a trio formed in 2011 in Nicosia, the capital of Cyprus.In their history they have got the acclaim by the audience and by the international critic. They  has recently gained many fans both in Cyprus and abroad with the 2013 release of their album “Grippy Grappa.” The band rearranges Cypriot traditional songs using a tzoura, guitar and wind instruments. It also composes original songs—commentaries on Cypriot contemporary life—influenced by the Cypriot music roots style. Monsieur Doumani presents mainly contemporary original and traditional Hebrew music. Insisting on acoustic instruments, half of which have their origin in the East, the ensemble integrates musicalelements from middle east with Western forms of music. Combining melismatic riches of the Eastern Maqam with the charming irregular rhythms-  they explore the territory of free improvisation. It is this uniqueness that Monsieur Doumani has focused upon, enriching traditional songs with new arrangements, melodies, rhythms and sounds and crafting a style distinctively their own. The traditional element is highlighted through the diversity of musical styles echoed in the group’s fresh and daring approach to the Cypriot folklore.Their third album with the symbolic name ‘Angathin’ (which translates as ‘thorn’) addresses more than ever, the political, social and activist concerns and sensitivities of the group members and it is a call for rebellion against corruption, racism and injustice. The album is released at he  Spring 2018.

–Sikoses, has been #1 at Transglobal World Music Chart

– Grippy Grappa, have been awarded ‘Top of the World” in Songlines magazine. 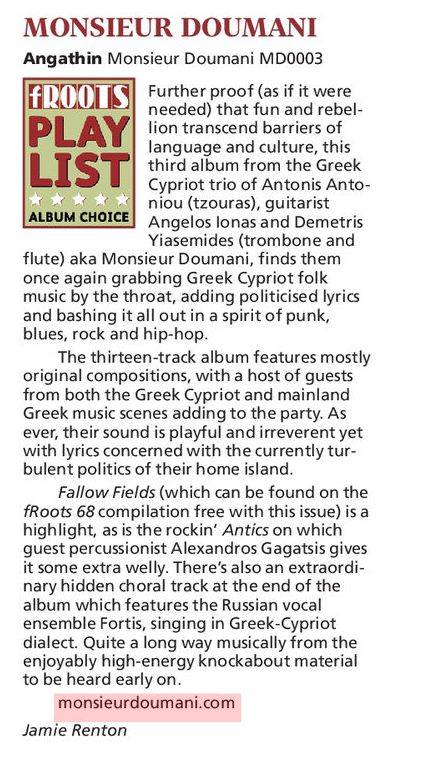